Home / Our Blog / Mexican Coffee Origins: Traditions, History and Where to Buy

Mexican Coffee Origins: Traditions, History and Where to Buy 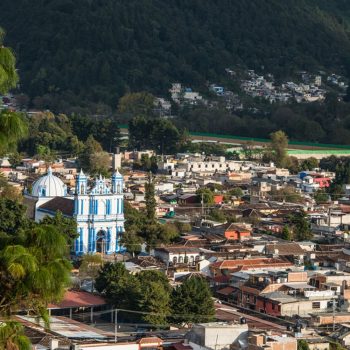 From Tequila and Tortillas to the mariachi bands and Mayan temples, there’s no doubt about Mexico’s food and drink culture. Both vibrant and rich, full of character while having a huge influence around the world.

But when talking about coffee, Mexico rarely gets a fair shake and here at Adams and Russell we’re here to change that.

The coffee farms in Mexico are relatively small and are situated on mountainous terrain, mainly ran by indigenous producers and while it is an often-overlooked gem, Mexican coffee production is growing and the coffees on offer are certainly worth taking note of.

Coffees from Mexico have been slowly emerging onto the specialty market whilst gaining popularity over the past 20 years for their balanced flavours, often ranging from syrupy sweet balanced with notes of grape and chocolate.

The History of Mexican Coffee

In the beginning cafés in Mexico were often used as meeting places between intellects, activists and academics to discuss current political issues and conspiracies, debate literature and read books and newspapers.

The political turmoil being experienced in Mexico during a time when consuming coffee was becoming a trend, formed a special setting within the cafes of the city where people from various socio-economic backgrounds would come to discuss the royal events and the rise of the first ideas of independence.

”You could see revolutionaries sharing a table with farmers and shop keepers, businessmen and taxi drivers. Many a cause was formulated with a pot of Mexican coffee.” – Carlos Sanchez

Once land was devoted to coffee production, the industry flourished and resulted in ‘the coffee boom’ in the 1950s, where it was being traded at prices never seen before.

The National Coffee Institute of Mexico (INMECAFE) was then created in the 20th century, guaranteeing stability in production quotas, price inflation and offering technical expertise. In 1989 the industry began to decline.

With the disappearance of the INMECAFE, insufficient policies and the artificially controlled price and production, the industry was in serious trouble.

Production declined by almost 7% with farmers earning 65% less than they did before.

Since 2006, Mexico slowly began building its production back up. It is now more focused on quality rather than quantity, with coffee connoisseurs willing to pay more for the high-quality beans.

This traditional Mexican beverage is named after the clay pot of which it is prepared in and the name “Café De Olla” literally means “coffee from a pot” in Spanish.

Traditionally brewed with spices, upon drinking, the coffee is bursting with flavours from the cinnamon, star anise and orange peel used during the preparation of the brew. The ceramic pot also adds to the flavour, giving it a complex and unique flavour.

The Coffee Regions & Production in Mexico

In a country filled with colour, thrill and exceptional food and farming, below we explore the Mexican regions of coffee production. On most Mexican farms all work is carried out by hand, and many farms are organic by default – indeed Mexico is one of the biggest exporters of organic certified coffee (though this distinction may be difficult to maintain in the face of coffee leaf rust).

Most of Mexico’s coffee is wet processed, although a small proportion of naturals are also produced.

El Cuarenteño is a rural community located in the foothills of Sierra de San Juan, just west of Tepic. This region has a strong history of coffee growth and production within Mexico.

In a region rich in sugar cane, tobacco, and citrus fruits, it was once a large privately-owned farm established by a wealthy land-owner in 1910.

After many petitions from his workers for a share in the land, the Mexican government passed an agricultural bill turning the farm into an Ejido – a communal area of land where members maintain communal holdings.

This cooperative system builds integrity into the coffee production as well as benefitting the members who work there. The system also has its roots in the ‘calpulli’ system originating from the Aztecs.

The plantation consists of 840 hectares and is grown at altitudes ranging from 900-1400m.

El Cuarenteño has about 840 hectares of land for growing Caturra, Typica and Mondo Novo varieties.

The coffee is grown in a steady climate with only 0.5 degree difference in temperature throughout the growing season. At 1000m above sea level the rich volcanic soils harbour perfect conditions for a consistent yearly crop.

After harvesting which is typically between September – March, the coffee cherries are taken to be processed.

The ‘Rustico’ wet mill located in the town of El Cuarenteño, using bare bones machinery due to the lack of space the members utilize the very rooftops of their houses as coffee drying patios.

Most of the washed coffee exported from El Cuarenteño comes from the Rustico mill, the attention to detail undertaken at the mill is a reason why the coffee is among the top lots on the cupping table.

El Triunfo is in the Chiapas region of Mexico on the Atlantic side of the country.

A natural forest canopy shades the plantations, which hold an abundance of local plant species and fertile breeding grounds for birds and small mammals.

In El Triunfo, they have a women’s project which was created to teach leadership development and co-operative management to the women members of CESMACH and the wives of members. The women also benefit from working with organic gardens and domestic animals to diversify their incomes and family’s nutritional intake.

The El Triunfo Biosphere Reserve stretches across 119,177 hectares in the Southern state of Chiapas, located in the south east of Mexico.

This extraordinary reserve ranges from 450 metres above sea level to a staggering 2550 metres.

What makes this biosphere reserve so unique is the two complex and outstanding ecosystems it contains, which include the Cloud Forest and the Tropical Rain Forest.

This allows a wide range of beautiful plant and animal species to thrive, making it a place of true wonder. Members of this community work hard and are committed to preserving the beauty of this reserve.

That is why they only use sustainable agricultural practices that are kind to the land and animals and avoid any disturbance to the natural resources.

In the famous coffee region of Pluma, Oaxaca, lies a long chain of volcanoes with very rich, fertile soils. This is ideal for growing the best Arabica Mexico has to offer, and at a high altitude.

These beans are wet milled, reducing the number of defects and giving a clean taste.

High elevation growing conditions slow down the maturity of the process of the beans. This prolongs the growing time and means less will be harvested throughout the year.

However, when the coffee cherries take longer to mature, this allows them to absorb a higher concentration of nutrients. The result produces a cup that is more flavourful, acidic and aromatic.

Most of Mexico’s coffee is wet processed, although a small proportion of naturals are also produced

This coffee comes from smallholder producers who deliver to the San Cristobal de las Casas and Yajalón buying stations in northern Chiapas, to the east and northeast of Tuxla Gutiérrez the region. The growing area, which runs between altitudes of 900 and 1,100 meters, is characterized by large bean sizes and a well-rounded, balanced cup with a smooth body — an ideal morning cup.

When extracted as an Espresso, enjoy it black, offering sweet notes of molasses and cinnamon with a dark chocolate finish.

The recommended brewing method is by Espresso – 18G/40G, 28 Seconds.

This coffee is from the glacier mountain of Pico de Orizaba, one of the highest in Mexico, and third highest in North America.

Grown in the south of Mexico, where most key plantations exist, these green beans are a consistent, well balanced tasting coffee even after the decaffeination process. The coffee is delicately bodied and pleasantly dry with a crisp snap. It is also 100% organic and rainforest alliance certified.