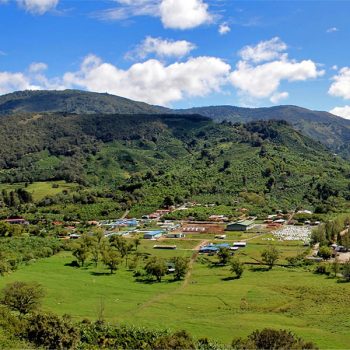 The history in which coffee is steeped in is as important and complex as the country in which it originated from, Ethiopia.

Ethiopian coffee production dates back dozens of centuries and the historic and cultural impact coffee has had on the world is central to the way we have become accustomed to the beverage being a part of our everyday lives.

And it is from the Ethiopian Gesha region that the Geisha varietal was first identified.

How the coffee became known as Gesha is a circumstance of pure speculation. It could have simply been misspelled, possibly through misinterpretation and then romanised into “Geisha.”

It is also said that Don Pachi, the man responsible for introducing the variety to South America, simply remembered it being spelt as “Geisha”.

But considering we weren’t present during its discovery and the fact that there is no clear documentation on why it was written as Geisha and not Gesha, we’ll let the theories end here.

The coffee was initially “discovered” by British colonialists in the 1930s who happened upon them when exploring the Gori Gesha forest. After seeds were collected by a British consul, the coffee was taken to and planted in Tanzania from there it then arrived in Costa Rica.

It was when it reached Costa Rica that the story became much clearer. A well-known coffee producer who went by the name of Don Pachi purchased it from an agricultural research organisation known as CATIE.

Don Pachi brought the seeds to Panama since they appeared to grow into rust resistant trees.

From there he apparently contributed them to his neighbours at Esmeralda, Mama Cata and La Esperenza.

The coffee came to prominence in 2005 when the Peterson family of Boquete, Panama, entered it into the “Best of Panama” competition and auction. It received exceptionally high marks and broke the then-record for green coffee auction prices

The care and attention given to the process of the beans is a huge factor in the end quality of what is truly a beautiful coffee.

What is it about Geisha coffee?

Geisha coffee carries a certain air of mystique that may or may not be well deserved, many consider it to be the most unique varietal.

It’s a coffee that, until as recently as 2004, was lurking in the shadows of the coffee world, waiting to burst onto the scene while shouting its name from the treetops and letting us all know that it exists.

The roasting team here at Adams and Russell Coffee Roasters have found this coffee to be tremendously pleasurable and has had us debating the flavour profile since it arrived at the roastery, it’s divided opinions over what coffee should be and has us rethink our approach to roasting and brewing coffee.

Batamba is the name of a sector on the Santa Rosa farm where the geisha varietal grows.

The area itself has always been known as Batamba and precedes the farm, remaining in place as a plot within the greater farm itself. The geisha here was planted in 2016, and so this is the very beginning of its productive life.

As with Gesha grown in Panama, the coffee is difficult to cultivate, demanding very particular growing conditions in which if they are not met, the unique and desirable flavour profile will be somewhat diminished or muted and less apparent.

Costa Rican Geishas are especially light in body and often have a gentle aroma with a floral, light sweetness.

Why should I try Geisha?

To some people “coffee is coffee”. From the archetypal coffees of South America that present a bold, full bodied, bittersweet cup to East African coffees which offer a conflicting profile which sits at the opposite end of the spectrum.

Geisha is a somewhat controversial varietal that certainly has piqued the interest of the team here at Adams and Russell and whilst the scarcity and limited cultivation of a coffee may lead it to its desirable status amongst many coffee aficionados across the world, it doesn’t necessarily denote the quality.

What sets Geisha apart from other varietals is its diverse flavour profile which for us is what highlights the appeal of this unique and rare coffee offering flavours of bergamot, candyfloss, cherry, coconut, honeysuckle, lime, pear, strawberry and caramel.

You can shop Geisha Coffee at Adams + Russell here.

The coffee was initially “discovered” by British colonialists in the 1930s

We have gone for a lighter roast profile, allowing for the beans to reach first crack which gives the cup a lighter body upon brewing.

This roast profile retains the volatile compounds which contribute to the subtle aroma and nuanced flavours of the coffee, keeping the identity of its origin intact.

There is no doubt that this is a mighty fine coffee, it’s considered one of the best coffees that the team here at Adams and Russell has tried in recent years.

It is incomparable in terms of aroma and complexity and definitely one for those that appreciate and notice the subtle difference in flavours when it comes to coffee.

The coffee is best suited to filter based brewing methods, such as a drip filter, v60 or aeropress, as the harsh pressure of an espresso machine fails to bring out the nuanced flavours of the coffee that make it so enjoyable.