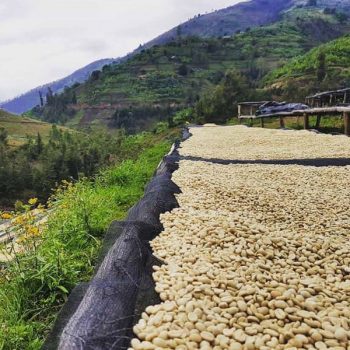 Shrouded in mystery, diverse in flavour and world-renowned, coffee in Ethiopia has been used for hundreds of years, as a food and beverage. It is referred to as the birthplace of coffee, but it was originally consumed by humans as a fruit and later adopted as a hot beverage.

From the wild forests of Kafa to the seedling nurseries in Yayu, coffee farmers in Ethiopia take their trade seriously, paying the utmost attention and care to the plants they harvest. There are 6 major coffee growing regions and they all play a major role in producing the countries, and easily some of the worlds, finest coffee.

In Ethiopia there is an ancient tradition known as tukke, a ceremony that has been in practice for as long as coffee has been consumed. Performed three times a day, ther ceremony entails not only the consumption of coffee but also the roasting process. It all takes place using specific equipment including ceramic coffee pots, ceramic cups and a charcoal burner and roasting pan. The ceremony is performed by women, they begin by roasting the beans in the pan which after they cool down are ground using a wooden pestle and mortar. They typically light incense during the ceremony and often invite over their neighbours to take part while talking about local news.

Mainly grown under the shade of trees there are three main production systems when it comes to coffee farming in Ethiopia.

These are wild coffee trees that grow in the south-western part of the country, these are typically low-yielding and have a broad mixture of different varieties.

These come from trees planted around a small estate or homestead offering less natural shade, garden coffees make up for most of Ethiopia’s production

The majority of Ethiopian coffee is organic by default

The majority of Ethiopian coffee is organic by default as most production systems don’t use any synthetic fertilisers, pesticides or herbicides. The coffee grown in Ethiopia is interconnected with natural forests giving it many environmental benefits.  Ethiopia’s coffee-producing regions are hugely varied, with cup profiles that differ dramatically among each region, micro-region, or even farm. But many are exceptional Arabicas that will have you asking for more.

Sidamo produces a mixture of washed and naturally processed coffees with the characteristics being fruity, aromatic and sweet. The region itself wasn’t formed until 1942 after it was liberated from Italian occupation.

Offering some of the most unique coffees, they tend to be boldly aromatic, with notes of citrus fruits and light bodied.

One of the oldest producing regions, it is said that the original domesticated coffee plant came from Harar.

Use our Ethiopia Sidamo to make a Cold Brew

Use 75 grams Coffee 1 litre of water. Grind the coffee very coarse, place in brew vessel, add 1 litre of water, ensuring grounds are completely saturated, stir to activate the brew and leave for 18 hours.