Home / Our Blog / Women in the Coffee Industry: Programmes, Platforms and Power

Women in the Coffee Industry: Programmes, Platforms and Power 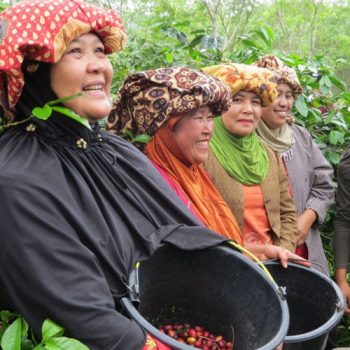 Year on year the coffee industry shifts according to the latest trends and it is usually through people becoming more inclined to care about the environment, sustainability and the future.

Unbeknown to many, women have been the driving force in the coffee industry with many farms around the world being solely powered by women. Yet, while many of these farms produce coffee that is unrivalled in quality, flavour and consistency they have a tendency to be overlooked.

We want to highlight and take a look at a few of the programmes which the team here at Adams and Russell have been supporting for the past few years and the farms involved in producing the coffee that we roast.

Women in remote and rural coffee communities face a host of challenges that keep them trapped in poverty.  Many of these isolated women live in male-dominated societies and have very little financial control or decision-making power.

In 2003, 464 women farmers in northern Peru decided to change this dynamic by separating their coffee production from the men’s. In that moment, for the first time, this group of women created their own product and income. Their coffee cooperative CECANOR joined their commercial partner Organic Products Trading Company (OPTCO) to create Café Femenino—a gender-focused program to support social justice and empowerment for women coffee producers worldwide.

The initiative was launched by Isabel Uriarte Latorre together with her husband in 2003, working with the Organic Products Trading Company (OPTCO). It originally began as a means to establish a market for Café Femenino allowing it to emerge from the shadows of the coffee production world and to highlight and promote the values and ideals of the programme. Soon after the model was adopted and expanded moving to countries such as Bolivia, Mexico, Rwanda, Honduras and Indonesia.

The programme has supported women in dealing with the barriers that they have had to face, changing the way they are viewed and the part they play in their society whilst diversifying coffee production and giving the influence to the women who have ambition and drive to create a sustainable business and an empowering way of living

AMPROCAL was established in 2007 in Pashapa La Labor, in the Ocotepeque department of western Honduras. Originally part of Copan until it was split in 1906, Ocotopeque lies in the western part of Honduras, bordering with El Salvador and Guatemala.

This all-female cooperative was founded by eight women to strengthen the presence of female producers in the area, they now have 86 female members and also offer coffee roasting and micro-credit services.

They are certified Fairtrade and have 39 members registered Organic. Farmers are provided support from an agronomist to improve the productivity and sustainability of their farms and there is also a focus on environmental conservation, with pulp and honey water being turned into organic fertiliser which they are taught how to correctly prepare and apply to the land. The AMPROCAL office itself is powered by the waste waters from coffee which produce biogas reducing their carbon footprint.

Teacher salaries, supplies to schools, and support to local communities with sports programs via uniforms and money to build fields are also provided. These activities help the local communities to grow and give children the chance to learn about teamwork and leadership.

In Sumatra it is the women who have continuously taken on the majority of the work that entails coffee production. They traditionally oversee the entire process from planting and pruning to fertilizing, drying and processing the harvested coffee. Though, because men are the proprietors of the land, once the coffee had been harvested and processed, they were the ones to sell the coffee.  Meanwhile, women can only purchase or inherit land, they aren’t legally allowed to share a land title with their husband. Thinking outside the box helped spark an idea for the women of Café Femenino to break away from such an outdated tradition: Each affiliate acquired a statement adavit by the male landowner. This would then grant them the ability to use the land. Since the women have the authority to use the land, they can now also sell their own coffee. This has been a crucial step in giving the women full authority over their livelihoods and businesses.

“In a traditional Fair-Trade cooperative, the men vote for how the social premiums are to be invested. Oftentimes, the women’s priorities are different and our voices are not heard. This was the motivation to form the first all-woman cooperative.” – Ernani Muzaputri Cooperative Member and Social Training Coordinator, Café Femenino Sumatra.

All members of the Café Femenino Sumatra Programme are women and all the leadership positions are held by women including the Chairwoman, Treasurer, Chair Supervisor, Coffee Collectors and Delegates. Amongst them, they share a vast wealth of experience and knowledge in the coffee and non-profit sectors. With this experience and knowledge, they continue to strengthen and build through continuous workshops and training opportunities. The women continue to progress their business skills improving and refining these skills that help change the gender dynamics of their region.

It is through this progress and development that more women have become inspired and caused them to rethink their own status in society. This also compels the men in these communities to reflect on their own behaviour and change their views regarding gender roles for the better. The women are now receiving support and admiration from their husbands who are contributing their own resources directly towards the Café Femenino Sumatra programme. This has helped establish education and community projects like never before.

The women here have built an organised system through strong communication with access to resources that has given them an opportunity to plan a bright future for their community, families and themselves.

Within the cooperative the women continue climbing the ranks allowing them to understand what it takes to become successful in the coffee industry. To get to where they are now, the women asked for workshops to provide them with in-depth training. This training has allowed them to gain the knowledge and understanding to cover all the bases when it comes to every step of the coffee production supply chain.

The women have testified a number of constructive and optimistic changes in their lives and their communities since becoming a part of Café Femenino in 2009. For them, the greatest change is their fruitful conception of a cooperative space in which all women have educational opportunities and a place to have their voices, ideas and opinions heard at the peak level of leadership. The changes these women have fought for have taken them far from the places of inferiority and suppression from which they began.

Starting from a place of low self-esteem and self-worth, the women of the Café Femenino Bolivia Program now see themselves as business women, taking control of their own destiny. And with the control of their own money, they have the ability to funnel their resources in the direction of their children and their community.

In partnership with World Vision in La Paz, the Café Femenino Bolivia Program trains and supports health promoters in a region that faces many health risks due to its geographically remote and poverty-stricken reality. This program provides immunizations, medicine kits, and health information in the communities where Café Femenino coffee is produced.

Delmy Regalado started in sales with another co-operative, COCAFELOL, she created the AMPROCAL coffee cooperative, as well as being president for the International Women’s Coffee Alliance in Honduras, part owning Finca Liquidambar, and running her own farm, Finca La Fortuna. The farm itself is a fourth-generation farm, handed down to 10 siblings from her father, and Delmy recognizes that not only did she inherit the land, but the work, tradition, and love for what the family did.

The farm is 3.4 hectares and produces around 80 bags in total each year.

The farm is 3.4 hectares and produces around 80 bags in total each year. Shade grown under orange trees, banana, lemon pine and more flowering occurs in April and May before the main harvesting of December to March. Waste that is created is eaten by the Californian red worm, a large grub that digests the coffee waste converting it in to a nutritious fertilizer used in feeding the plants organically.

The following coffees we have on offer from the aforementioned programmes were carefully selected by us, not only for the flavour and quality of the coffee but also because we have strong convictions and trust in supporting these programmes and the women who play a critical part in the coffee industry. We want to push back against gender inequity, believing that it has no place in the industry.

A sweet, full bodied coffee that has plenty on offer in terms of chocolate and fudge flavours, a bold creamy mouthfeel followed by a dark chocolate aftertaste.

A new favourite amongst the staff and the first Bolivian coffee we have ever tried, this syrupy sweet coffee is smooth, crisp and clean with tasting notes of baked apples.

This coffee offers a rich and lush mouthfeel and is made up of the unique varietal known as ateng super that contributes to its complex flavour profile.