The aroma is very noticeably clean, rich molasses. On the initial taste the brew will have a very distinct, strong, satisfying treacle toffee taste.

This is super rich and really coats the pallet on each sip. As it cools, a light spice will present on the finish, maybe on the border of liquorice and cinnamon.

This coffee really stands out with its uniqueness!

The Myazedi community is made up of the Danu Hill and Pa-o tribes.

The community is based within the location of the Myazedi inscription, which is Myanmars own Rosetta stone. The stone tells a story of Prince Yazakumar and King Kyansittha in four different languages, providing a translation of the written Pyu language.

The lands surrounding the location have been held by the tribes for many centuries and of modern times have been used for the production of coffee and fruits.

Hundreds of farmers work on small plots of between one and five acres each, tending to a fertiliser free Caturai.

The community is helped along by the Shwe Ywar Ngan. Created by U Win Aung Kyaw, the organisation has helped provide up to 200,000 of suitable seedlings for the conditions around Taunggyi, and support small producers with micro finance loans to help them boost and extend a quality growth.

The Shwe Ywar Ngan has set guidelines on a sustainable growth of produce, banning the use of fertilisers. The success of the organisation has made the area one of the biggest coffee producing areas in the country.

Once ripe, coffee producing cherries are hand picked and left to dry ferment for 18-24 hours before being washed, this helps develop the cleaner flavour, before being spread on raised drying beds for 48 hours. After 48 hours, the seedlings are moved to patios to further drop the beans moisture content to the desired percentage.

Once dried, the beans are dry milled to clean off left over mucilage, then taken to the MCG facility in Pyin Oo Lwin to grade and ship the final product. 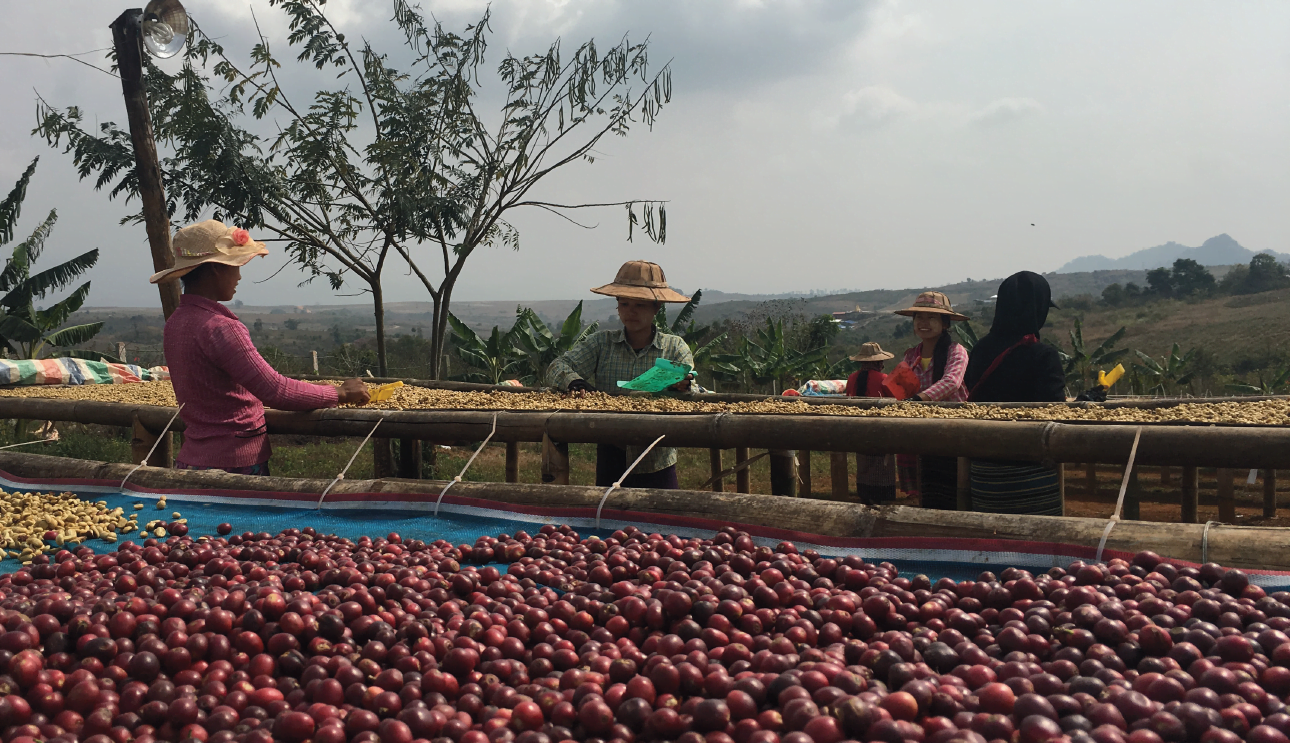 Here is a brief timeline of the history of coffee Myanmar thanks to Myanmar Coffee Association:

1994 – Ministry of Agriculture & Irrigation carried out the cultivation and production of the crop where it remains to the present day.

The base of this crop was planted by Scottish inhabitants in the 1930’s – back when the country was known more commonly as ‘Burma’. The recent change in political status has allowed more exports of coffee, pleasantly introducing itself as one of the most exciting new coffees to come out of South East Asia.

The country receives about 1600mm of rainfall every year, which is optimal for the beans. With temperatures ranging from 2°C to 39°C, this is just another factor that adds to the high quality of these beans.

What is Washed Coffee?

Also known as the wet process, this is where the cherry is pulped by a machine to remove the outer layer of skin.

Once this layer has been removed, the beans are then fermented for at least one or two days. It can be even longer than this depending on the desired flavour.

Finally, the beans are washed to remove the mucilage, so the aromas can be released.