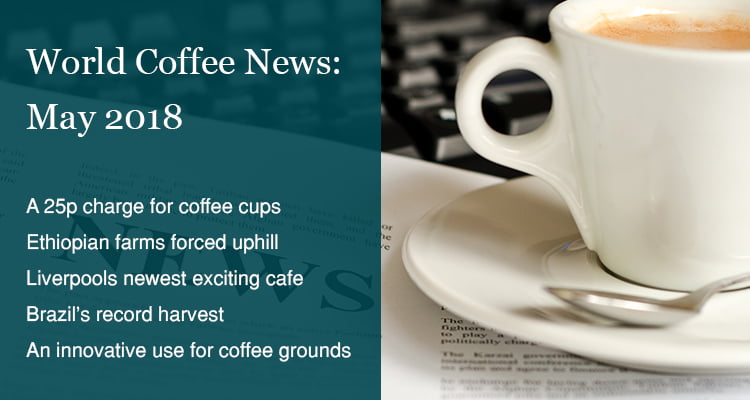 Find a convenient summary of the astonishing events happening in the coffee industry right here, and with around 150 million bags of the beverage consumed each year, it’s not hard to believe there is always something new to discover.

As the craving for coffee beans continues to grow, so does the thirst for knowledge about our favourite drink. What’s new on the ever-expanding coffee market? Who is pioneering the latest ground-breaking techniques for perfecting the roast with the most?

Navigate through the stories using the buttons below…

We aim to provide the answers, and more beside, in our brand-new monthly blog, a comprehensive account of all the events and announcements, updates and developments from the world of coffee.

Would you pay 25p for a disposable coffee cup? Are you a particular fan of Ethiopian coffee? Both topics are in the news at the moment in a big way, so keep reading to find the lowdown.

Also read about the latest addition to the coffee scene in Liverpool, big announcements from the world’s largest coffee producer and an innovative company that is changing the way we dispose of coffee waste.

Get ready for the latte levy – or not…

In the UK, around 5,000 disposable cups are thrown away every minute. That’s around 2.5 billion a year.

It is clear this needs to be reduced. However, the way we do this is a little more complicated.

The government’s ‘war on plastic’ was heading in the right direction, with the ban on plastic straws and introduction of a plastic carrier bag charge. In fact, the 5p cost for each carrier bag saw an 85% decrease in demand for them.

But the plans to reduce plastic have been put on hold for the time being, as the ‘latte levy’ has been rejected.

What is the ‘latte levy’? Quite simply, a 25p levy on disposable coffee cups.

This change of heart came after a study commissioned by manufacturers. They stated that the levy would cost up to 11,000 jobs in the UK.

More research conducted by the Paper Cup Alliance claimed that only 6% of consumers would switch to reusable cups and 8% would refrain from purchasing a drink.

The group proposes to encourage recycling, stating that all paper cups made in Britain are 100% recyclable. Astonishingly, only 1% of the 2.5 billion cups disposed of every year in the UK are recycled.

The plastic lining inside the cups could be held accountable for this, as they require specialist recycling facilities.

In an effort to address the problem, major coffee chains have already started to introduce specialist recycling bins in stores and reward customers who bring reusable cups.

Is this a step in the right direction, or do you think more can be done? We would be interested to hear your thoughts in the comments section.

Onwards and upwards: Why Ethiopia farms are being forced uphill

Rising temperatures are causing the founding country of coffee to move uphill – up to 3,200 metres above sea level, in fact.

The average temperature climb of 1.3 degrees Celsius over the past three decades has made a bigger impact than most might think. Temperature isn’t the only factor to blame here, as a lack of rainfall has also had a huge detrimental effect on the farms.

Ethiopia’s earnings of 860 million US dollars in 2016-2017, combined with the cultural importance of coffee, is causing the country to take serious action.

The higher altitudes are believed to allow the crops to adjust to climate change. The uphill move will allow the farms to stay at optimal temperatures.

Will a higher elevation affect the beans? In short, yes.

Higher elevations produce harder and more dense beans. These are far more sought-after than beans grown at a low elevation, which are softer.

They are seen to be more premium because of the higher concentration in sugars, which produces more desirable flavours.

The fifth-largest producer of coffee in the world has already taken the government’s recommendations to move uphill and enforce forest conservation.

Cuddles at the Cat Café? Liverpool welcomes a family of furry feline friends…

Cat Café has landed in Liverpool, and there is already a buzz of excitement among cat lovers in and around the city.

Find Cat Café on 10, Bond Street, with opening hours 9am-8pm on a weekend and 10am-8pm on a weekday (apart from Tuesday, when it is closed for the day).

The concept has been quite literally years in the making, and the owners plan to take over every major city in the UK.

They strongly believe ‘cats can help us physically, mentally and emotionally.’ Cat Café also tells us that a cat purr can help to lower blood pressure and slow heart rate, making us feel more relaxed.

While you’re unwinding with their resident star attractions, you’ll find an extensive bakery menu, with cakes, muffins, biscuits and other snack items, as well as a selection of hot and cold drinks. Interested in an afternoon with some feline friends? Meet some of the furry family on the Cat Café family page.

58 million sacks are expected to be produced by the world’s biggest producer of coffee in the next year.

The head of the CECAFE exporters’ association shared last month the news of their harvesting expectations, despite accounts of “economic and political chaos” in the country.

This is quite a jump from the 44.97 million bags produced last year, and some predict it could even exceed 60 million by 2019.

“We have both quality and productivity,” head of CECAFE Marcos Matos said to a Spanish news agency. “Also, Brazil’s diversity caters to the world’s most demanding markets in terms of quality and certification, which is a very positive sign for the next harvest.”

Farmers across the country have spent the past few years heavily investing in their growing conditions. This paired with the generous rainfall in the past year has resulted in lush trees and perfectly ripe beans.

A ‘wonderfuel’ company that is changing the world of coffee waste

Where does the 500,000 tonnes of coffee ground waste go every year in the UK? The majority will end up in a landfill site that emits methane, a substance that is 28 times more powerful than Co2.

In 2013, Arthur Kay discovered a niche in the market, at a time when even the most sustainably designed coffee shops were generating masses of waste.

Bio- bean works with companies across the UK to whisk away their coffee waste and turn it into 100% carbon-neutral biofuel. The process includes drying out the grounds, mixing with sawdust, compacting and coating with wax.

The company has now extended its offerings to the general public in the form of a coffee log.

The logs burn 20% hotter for longer than your average wood log, the founder claims. The natural oils in coffee are the wonder product in this invention, although the log won’t smell like the delicious drink when your burn it.

The team of research scientists at bio-bean are continuously exploring new ways to use coffee grounds beyond biofuel.

The ‘wonderfuel’ company is taking coffee waste one step at a time, and we’re eager to see what their next move will be.

Some Coffees are Seasonal…

Do you want the best coffee and brewing methods at the best time of year?

At the BBC Good Food Show

We endeavour to respond within a few hours